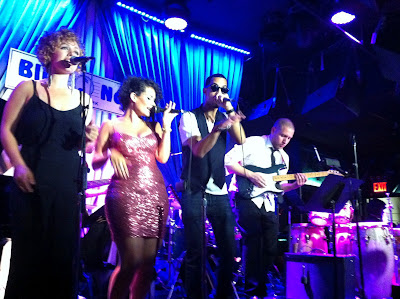 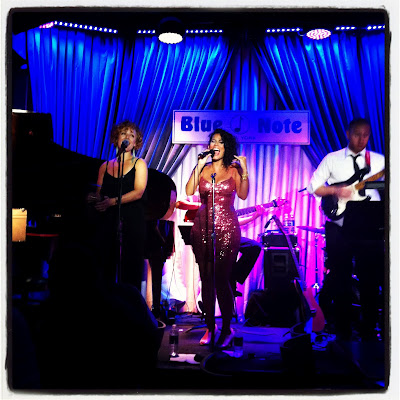 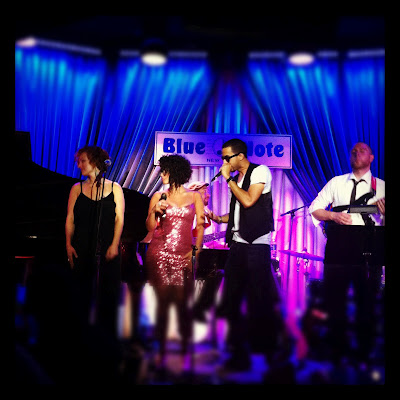 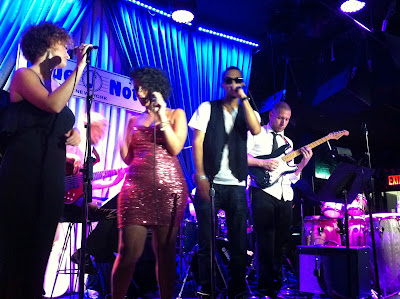 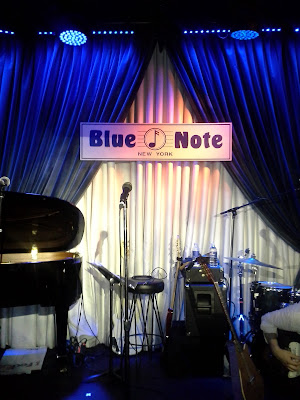 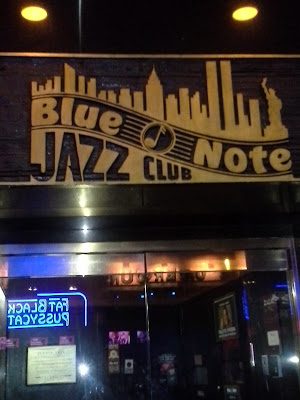 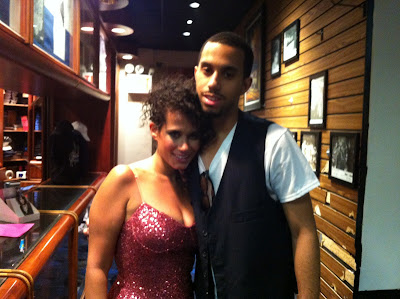 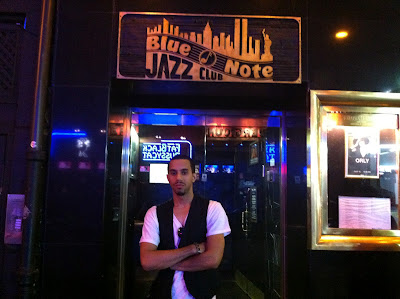 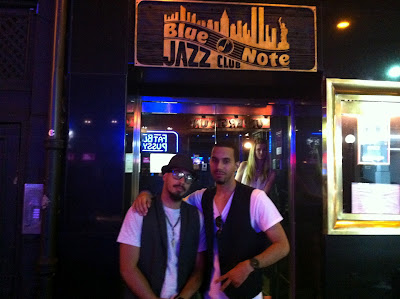 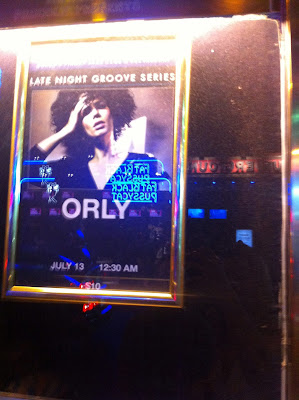 Had a great performance Friday night at the legendary Blue Note!  I wanna give a big shout out to Orly for inviting me to come perform with her and her band.  We performed "Stay" off her album Distraction and we even did a cover of Rihanna's "Umbrella".  We did a great job with the song, if I may say so myself lol The band sounded amazing. Had a great crowd in attendance.

For those who don't know, I just graduated from City College with a BFA in Jazz Performance.  I've been around a lot of talented jazz musicians throughout the years so I definitely understand how special it is to perform at the Blue Note.  Musicians like Elvin Jones, Dizzy Gillespie, Ray Charles (the list goes on) have performed at the Blue Note.  The fact that I was able to RAP at the Blue Note is crazy to me.  This will without a doubt go down as one of the most memorable moments of my career. 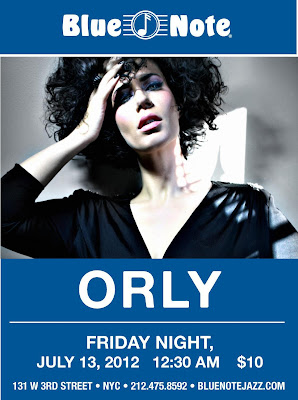 I will be performing tonight with Orly Terkasher at the Blue Note in NYC.  So many legendary Jazz musicians have performed at this club.  It's still pretty crazy to me that I'm gonna be rapping at the Blue Note lol Gonna be a lot of fun! Pics coming soon...

Those who know me would tell you that I am a big fan of McDonald's. And I knoooow there are a lot of people out there who always wondered "Just what exactly is in the special sauce of the Big Mac?" Well here it is people! Here's a video of an Executive Chef from Mickey D's showing us all the ingredients of the "special sauce" and how the delicious Big Mac burger is made. This really warmed my heart lol. Hope it does the same for you... 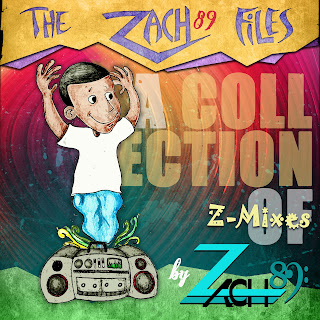 Zach89 drops his 2nd mixtape The Zach89 Files. The Zach89 Files is a collection of Z-Mixes.  On the mixtape, Zach89 puts his own spin on some of radio's hottest records such as Diggy Simmon's "88", Drake's "Make Me Proud", Tyga's "Rack City", and many more.

Check out Zach89's new freestyle to Kanye's "Theraflu".  Hear what 89 has to say about Kanye & Kim, the Trayvon Martin Case, and more.

Zach89 remakes Diggy Simmon's single "88" and flips it to "89".
Download Link available (Top Right)
The Z Factor mixtape set to drop May 8th!
Posted by Zach at 6:12 PM No comments:

Mixxclusive: Zach89 Looking to Join Queens’ Lineage of Hip Hop Legends
by Nikki @NikkiBeezus
Zach89. The name may be unfamiliar now, but after looking at Queens, New York’s track record of churning out hip hop legends- it won’t be for long. The one-time reality star (Run’s House) and 1/3 of Team Blackout is out to prove that he’s not a rich kid with a famous co-sign. In fact, he’s much more than that. A college graduate with a degree in music performance, Zach’s musical talents have the potential to take him far beyond everyone’s expectations…and more.
With one very successful mixtape, RapZhody, still making waves on the Internet and another one on the way, people will finally get to know why he’s worthy of their time. Check our Mixxclusive below:
Mixx: Did you grow up playing different instruments?
Z: I played the drums- that’s my main instrument. I dabbled in a couple other instruments like piano, guitar, but drums is the main one.
Mixx: When did the rapping come into play?
Z: Coincidentally, I got into rapping and playing the drums around the same time actually. I was around 10 years old at the time. I just got into both of them real heavy and kept up.
Mixx: What is it about hip-hop that drew you to it as a kid?
Z: I think what it was about hip hop was the aggression. I’m a quiet, real laid back kind of kid and that aggression brought something out of me.

Mixx: I’m sure you look up to other rappers from Queens. Is there one in particular that is a major inspiration?
Z: I’m a HUGE Nas fan. There are so many legends from Queens.
Mixx: Do you feel any pressure coming from Queens as well?
Z: Actually, I don’t feel any pressure. I feel more of a sense of pride. Saying that I’m from Queens just feels good. I’m glad that I was born and raised here.
Mixx: Speaking of Queens rappers, what do you think of Nicki Minaj?
Z: I got mad love for Nicki Minaj. She’s a superstar; she’s on a whole other level now. She’s the only female rapper out there right now that’s killin’ it, so I can’t hate on that…I definitely appreciate what she does and how she approaches a track. She has so much charisma and style and the way she raps is unique.
Mixx: How do you think your jazz/music training sets you apart?
Z: I would definitely say that it sets me apart. Being an actual musician helps with my rapping because I can play around with different rhythms; I can approach the music at a different level as opposed to the typical rapper.
Mixx: Do you produce?
Z: At the moment, no. I want to produce. I don’t know much about the computer/technical side of things, but as far as playing an instrument, I think I could really get into that and produce later on.
Mixx: For those who don’t know, what is Team Blackout?
Z: Team Blackout is group consisting of me, my man Reggie (Poulard) and JoJo Simmons (Rev Run’s son). Run’s House is where we got our first ‘look.’
Mixx: What was the reality show experience like?
Z: It was cool and definitely a learning experience. The first time I was ever on the show…I was 16 years old. I was fresh in the game; didn’t know nothing about nothing and I feel like I grew a lot as a person and an artist by being on the show all those years.
Mixx: Are reality shows really ‘reality?’
Z: It’s reality. They don’t have the cameras in there 24/7, but they have it on a certain time frame.
Mixx: Is Team Blackout still together?
Z: We’re still a group. We were friends before we started doing the music thing. But we made a conscious effort to focus on our solo careers so everyone can get to know us on an individual level. But, if an opportunity came up for Team Blackout to shine, we’d definitely take it. But, right now, we’re working on solo stuff…I would say we’re on a hiatus, but we’re definitely not over.
Check out the rest of the interview here http://bit.ly/Zach89TheMixxMagazine
Posted by Zach at 4:17 PM No comments:

Promote Your Page Too

Websites to Check out

Zach
Queens, NY, United States
Zachary Elyshevitz was born June 11, 1989 in Queens, NY. The son of an African American mother and Caucasian father, he was exposed to both cultures as a child. He always had a love for music growing up in a household that listened to different artists ranging from the Jackson 5 to The Beatles. Growing up he was very quiet and shy. He first came out of his shell winning a third grade talent show performing Michael Jackson's Billie Jean. From that moment on he was destined for greatness. Zach attended Highland Elementary in Queens. In the first grade, he would meet his longtime best-friend JoJo Simmons (Reverend Run's son). Zach and JoJo used to participate in school rap battles during their lunch period. Being the two best rappers in the school, they both decided that they should record together. They made their first recording on a karaoke machine in the basement of JoJo's house in Queens. They would graduate from karaoke machine to boom-box eventually recording on Pro-Tools. During their freshman year of high school they met Reggie. Impressed with Reggie's innovative flow, they formed Team Blackout (inspired by the 2003 NYC Blackout).